At first many don’t notice. Lizzy just rides, even though she was born without her left hand. Lizzy’s journey has been unconventional. Growing up at family-owned Carousel Farm, Lizzy spent inordinate amounts of time training the horses to do things limited only by her imagination. By age 7, she was performing bridleless jumping routines, liberty, and tricks at national events. By age 11, she was teaching many topics at the biggest expos in the US and Canada and had produced the nationally acclaimed Taiji Horsemanship Training Series. 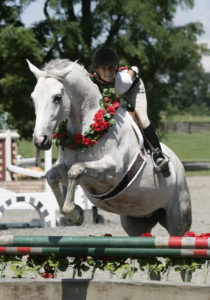 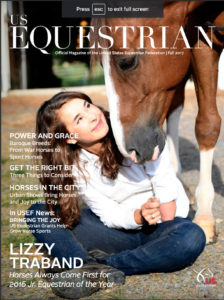 As one of 43 invited performers at the 2010 World Equestrian Games Lizzy fell in love with show jumping and landed a grant from the USHJA to compete in Wellington, Fl. With an unrelenting work ethic, dependent on borrowed, traded, donated, or homebred horses, Lizzy went on to be a regular in Florida becoming a well-known nationally successful junior rider. She was named 2016 USEF Junior Equestrian of the Year.

Maintaining an aggressive riding schedule, while completing a degree in Finance at Penn State, Lizzy continued to garner national USEF, USHJA, and IHSA, as well as “Penn State Female Athlete of the Year” accolades. In the summer of her junior year, she made her European riding debut in the Czech Republic competing over 20 horses in over 100 starts. As a sophomore at Penn State, she won Penn State’s coveted “Launchbox Summer Founders Entrepreneur Contest” with the creation of EPN Global, a customizable digital platform for horse farm data, marketing, and management.

Quiet and understated in her mannerisms, Lizzy has become memorable and recognizable, as people see her get on mount after mount, developing a quiet balanced bond that results in consistent competitive performances. Often people do not notice that Lizzy does it all without her left hand.

With sights set high, Lizzy is deeply appreciative of the horses in her life and our incredible equestrian community. Lizzy invites you to join her on her uphill journey to becoming an internationally competitive show jumping rider. 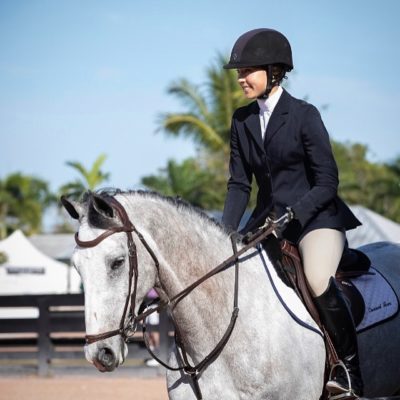 Meet the Squad: The Riders of the 2019 IHSA Metropolitan Equitation Invitational

Lizzy’s personal invitation to take you on…

Lizzy specializes in identifying and developing high performance horses.  Whether you want to be an active participant in the sport or just a spectator, an investment with Lizzy will be one you can enjoy!

Schedule a Clinic or Keynote

Lizzy has taught a wide range of topics at many of the largest horse venues in the world, to standing room only audiences. Lizzy can travel and tailor a custom clinic or keynote to your specific audience. Guaranteed to be fun, productive, and inspiring!

Find your Next Horse

Looking for your next high-performance horse or just a horse that you can enjoy riding? Lizzy is dedicated to finding each and every horse and owner the best match. Let Lizzy utilize her connections and help find you your next horse.

Join in the Journey…

END_OF_DOCUMENT_TOKEN_TO_BE_REPLACED

Her skills are well beyond her years. She learns by listening. She learns by watching. She odesn’t have to ask a whole lot of questions. If you just kind of sit back and watch, there is a way to do it. She figures it out. There’s really nothing she can’t do!

Lizzy has always had a maturity beyond her years. She is a quick learner…able to take many different instructions at once. She can accomplish a good deal more than an average student in a given session since she can take in a lot at once, and we can work on improving not only her but also her horse. Her horse’s well-being is always foremost in her mind, and she understands that everything she does has an effect on her horse. Beyond her attitude is her ability. Lizzy was born with a natural feel to ride, which is something you really cannot teach.

Not only is she a great kid who rides well, but she also sits at the ring all day and watches and then she sets jumps. She is right there with you. She wants every bit of information that you can give her.

Our afternoon with Lizzy Traband…..My daughters are nervous to meet her. Lizzy was featured in American Girl magazine, and it feels like we’re meeting a celebrity. Once they meet her, there’s nothing to worry about. She’s offering treats and friendship at the first encounter. For a whole afternoon, the girls follow Lizzy around. You don’t notice that she has one hand: she’s cleaning out stalls, feeding her horses, and performing tricks with her pony, Puddles. The whole time, Lizzy’s teaching me all about her technique called Taiji Horsemanship. It’s a method. Her principles are simple: kindness, stillness, communication, simplicity. She teaches that “failure is a requirement of success” and that “you need a plan so you can ride with purpose.” Lizzy takes her time, steps back, and revisits simple rules. She lives out her own method. As we drink lemonade together in the barn, I think more about what I’ve observed here: Kindness, stillness, communication, and simplicity between horse and rider. It’s not just about horses; I realize the power of these principles in mothering and friendship. I think about a writer’s relationship to her own words or a photographer’s interaction with the natural world. I move out across the landscape more quietly, more kindly. With this kind of stillness and simplicity, the colors do indeed seem all the more vibrant.

Heather HaldermanWriter of "Living with Flair"
Go to Top